Fall card for the Freshly Made Sketches challenge 448

Very hot day here in Nevada and a chance of thunderstorms this afternoon so I decided it was a good day to be crafty. Today’s card is a fall card that I planned to enter in the Freshly Made Sketches challenge #448.  The challenge closed at 3 ET so I was too late to enter. Lesson learned: Don’t procrastinate! 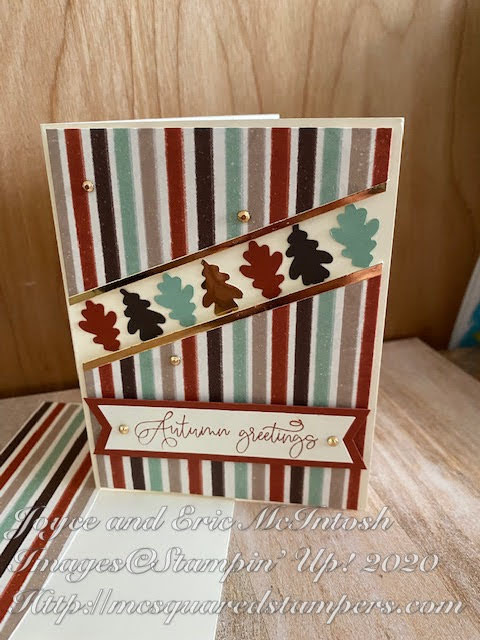 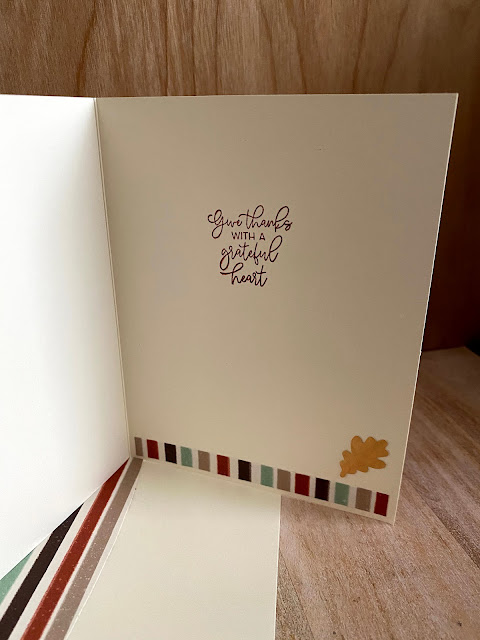 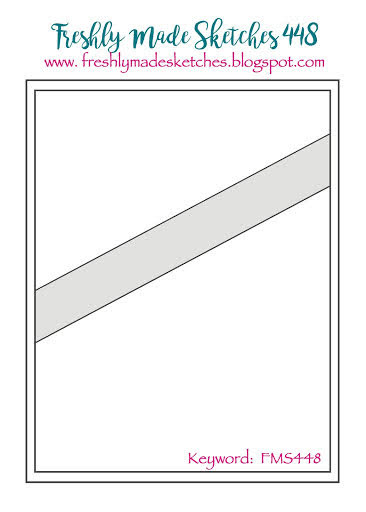 I started with a 5 1/2 x 8 1/2 piece of heavy very vanilla cardstock. I scored it and then folded it in half.
I then took a 4 X 5 1/4 piece of Gilded Autumn Speciality DSP and cut it at a diagonal in the middle. I trimmed each end so the opening in the middle would be 7/8 inch which was the size of the leaves from the Autumn Punch Pack Punch. I punched several leaves out of mint macaron, cajun craze, and early espresso to coordinate with the DSP. I punched one leaf for the middle out of gold foil paper. I used dimensionals to pop up the DSP and then glued the leaves to the cardstock in the middle opening. I thought the card needed a little something so I cut two 1/8 inch strips of the gold foil and glued to each side of the opening.
I stamped the greeting using a stamp from the Autumn Greetings stamp set on very vanilla. I cut the strip to 3/4 inch and then trimmed each end with the new Banners pick a punch. I thought it was a little plain so I cut a 1 inch piece of Cajun Craze card stock and trimmed it with the punch to add a nice background. I then popped this up with dimensionals as well. I added some of the gold gilded gems to finish off the front of the card.
For the inside I cut a small piece of DSP and glued to the bottom along with another gold foil leaf. I stamped the sentiment from the Autumn Greetings Stamp set. I added a piece of DSP to the flap of a very vanilla envelope and glued another gold foil leaf to the front of the envelope.
I sure hope fall comes soon. It’s been a pretty hot summer. I love the thunderstorms but unfortunately they have started several large fires around the area.
Posted by Joyce McIntosh at 3:19 PM

Joyce McIntosh
We are retired and love crafting. We live in Nevada . We have two grown children and are blessed with 1 grandson and 1 granddaughter.